Leen Dresen, Towards a national landscape: botanical walks in the journal Album der Natuur (1861-1909)
This article traces developments within the 'botanical walks' that were featured in the successful Dutch popular science journal Album der Natuur, and proposes to interpret these developments as an indication of changing cultural attitudes towards the national landscape in the Netherlands. The first botanical walks in the 1860s were aimed at collecting as many different plants as possible, without paying much attention to any kind of 'national' character of the vegetation. However, during the 1870s and 1880s, identifying the national character of the vegetation became the main focus of the walks. Nationality was seen to express itself in vegetation and in humans, as a native and historical essence of the local climate.

Around 1900, a new generation of authors adopted a new approach by no longer focussing on the historical character of the landscape. Instead, the reader was now taken for imaginary walks along new stereotypes of the Dutch natural landscape, which were formulated in biological and didactic terms: like the forest, the dunes and the polder. This new style of botanical description concurred with the rise of the nature conservation movement in the Netherlands, which displayed the same progress-oriented outlook towards the Dutch natural landscape.

This article is part of the special issue 'Landschap, natuur en nationale identiteit'. 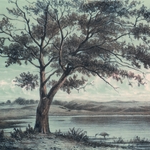