Wessel Krul, The Hague School and the national landscape
From the 1870s onward, the so-called ‘Hague School’ was credited with the invention of a type of landscape painting which was felt to be truly national, in the sense that it realistically depicted the atmospheric qualities of the Dutch countryside. This connection between painting and national identity retained its influence until far into the twentieth century. The main characteristics of the new landscape painting were said to be ‘simplicity and veracity’. These ideals, however, had already been propagated in Dutch art criticism for a very long time.

Wessel Krul examines the relationship between the changing concept of national identity in the Netherlands and the evolution of landscape painting from the Biedermeier style of B.C. Koekkoek and his followers to the new ‘realism’ of the Hague School. The identification of the new landscape painting with modern national sentiments was closely connected with the rise of the progressive liberal movement in the 1870s. Although the idea seemed convincing to several generations, the conception of the Hague School as the ‘true expression’ of the Dutch nation was as much a myth as the attempts at nationalism in painting that preceded it.

This article is part of the special issue 'Landschap, natuur en nationale identiteit'. 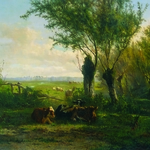