Olaf van Nimwegen, The Dutch army and the early modern military revolution
Since the 1950s, all studies into warfare during the early modern period have been dominated by the idea of a military revolution. The Dutch army plays a pivotal role in this debate. The reforms introduced by Maurice of Orange and his cousin, William Louis of Nassau, are hailed as the beginning of the modern army. In this contribution, the author endorses the importance of the Nassaus' tactical reforms, but challenges the assumption that they also ushered in army reform. As long as the government wanted to keep its involvement with the army as indirect as possible, army growth was limited and the knowledge and expertise gained in wartime was quickly lost in peacetime. It was only after the 1670s that the armed forces of the Dutch Republic were transformed into a standing army made up of professional troops. It was following an attack by the French in 1672, whose forces were far superior, both in terms of sheer numbers and organizational prowess, that the Dutch were forced to restructure their army. With this, the Nassau tactical revolution became embedded into a much farther reaching organizational revolution. 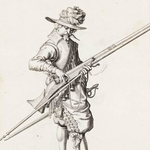