M. A. G. de Jong, Military reforms in the State army and the growth of the arms industry, 1585-1621
This article looks at the consequences of the military reforms carried out under Prince Maurice of Orange upon the demand and supply of arms and munitions for the State army, especially the infantry. Five key aspects of these military reforms were examined: the increasing use of firearms; the standardization of arms; the growth of the State army; the increasingly important role that sieges had come to play in warfare; and, regular payments to the troops. When combined, these developments influenced the scale and nature of the demand made by the army in particular and, subsequently, the development of the arms industry as a whole.

In their efforts to address this rapid increase in demand, a clear tendency towards concentration became evident among the entrepreneurs in the arms industry. The increased level of production that was required led to a number of important changes in the structure and organisation of the arms industry: standardization, granting buyers credit in the form of raw materials, fixed contracts, the distribution/dispersal and division of labour. During this process, the Dutch authorities consistently played an expressly guiding role. Through the direct link between the troops of the State army and the suppliers of arms on the one hand, and the provincial authorities on the other, the decentralised state system could furnish the State army with its requirements in an efficient and effective manner. 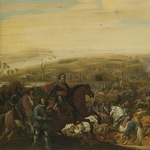