The shape of the city. An evaluation of recent historical studies on Dutch towns

Urban history in the Netherlands started roundabout 1970. It was initially promoted by mainly economic and social historians who used concepts derived from geography which centred on town and country relations, urban networks, and migration. The spatial factor was considered to be a core feature, also inside the towns and cities. An alternative view, however, argued that a completely introspective urban history, focussing on one city, would result in more integration. This hypothesis has been proved in a number of recent, more or less integral urban histories, commissioned by several independent municipal authorities in individual cities. They show that a combination of internal and external elements offers the best results with regard to integration. 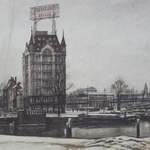 ‘Behaviour and Morality have Remained Irreproachable, and his Commercial Reputation is Good’