Slavery is (Not) Our History: On the Public Debate and Divergent Meanings of the NTR Television Series Slavery

This article discusses the debates that followed the broadcasting of Dutch NTR-television series Slavery (De Slavernij) in 2011. While the series was aimed at informing the general public about this silenced part of Dutch history, the subsequent debates on the series revealed fault lines in Dutch society with regard to ideas on how to know and represent slavery adequately. Although most participants, in line of a positivist epistemology, made appeals to historical facts, these debates clearly demonstrated how knowledge and representations of slavery are positioned in a social and academic field that is always characterised by power relations.

Postcolonial critics, whose voices are underrepresented in Dutch academia and media, held very different perspectives on the nature of ‘valid’ paradigms, ‘true’ facts, ‘proper’ interpretations, ‘appropriate’ historical referents and representations concerning slavery to people who praised the series. These polarised debates pose the question of how to engage with the history of slavery without resorting to (biological) essentialism that is precisely one of its potent legacies ‘we’ want to overcome. 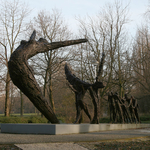