Etienne Rooms, The salaries, provisions and quarters of the Royal troops in the Spanish Netherlands
Spain wished to play a leading role in Europe and, for this reason, the strategic location of the Southern Netherlands was of the utmost importance. Consequently, ever expanding armies had to be stationed in the Southern Netherlands. In addition to this, military exertions were also necessary in Italy, the German Empire, on the Iberian peninsula and in the colonies. From the seventeenth century onwards, it became increasingly obvious that Spain lacked the financial capacity to carry out such an ambitious policy. As a result, troops in the Southern Netherlands were paid on an irregular and partial basis.

Supplies also left a lot to be desired and there was no money left over to provide the soldiers with winter quarters. In order to avoid mutiny and pillage, the local authorities often had to step in and assume responsibility for these matters. The quality of the royal troops therefore fell to an all-time low. In the end, Spain had no means to defend the positions in the Southern Netherlands against French aggression. The only reason why Louis XIV could not annex the Southern Netherlands to his kingdom was because England and the Dutch Republic gave their full military support to thwart this annexation. 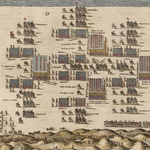